This month, the Pennsylvania Link to Aging and Disability Resources’ Berks County partners’ network will collaborate with the Wyomissing Public Library and Phoebe Berks to host Death Cafes in Berks County. Death Cafes are always FREE to attend and there is never a set agenda or selling allowed.

The Wyomissing Public Library Death Cafe will be held on Saturday, February 9 from 1:00 to 3:00 pm.

At each Death Cafe, a FREE screening of a film follows the Death Cafe at 4:00 pm 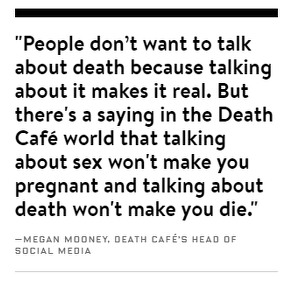 “WE SAT IN a circle, clutching paper cups full of steaming coffee and tea. First, I said my name. ‘Hi, I’m Lexi.’ What came next wasn’t an admission of addiction, but a statement about what I feared most about death. ‘I fear the unknown,’ I began, but paused. That didn’t quite sum it up. My voice tight from nerves, I added, ‘Nothingness. Losing everything I’ve ever known. The whole thing, really.’

“This is life at Death Café, an event where strangers gather to snack and chat about shuffling off this mortal coil. It sounds (literally) morbid, but in this Age of Anxiety, as people grapple with climate change, threats of violence, and political and economic instability, death lingers on many people’s minds. A fear of dying is at the root of all those stressful issues and, as Sheldon Solomon put it when speaking to The Atlantic in 2015, those things are ‘all malignant manifestations of death anxiety running amok.’ It’s cyclical: Anxiety spiral, fear of death, bad decisions, rinse, repeat. Despite this, people rarely talk about their own mortality. Death Cafés strive to break that taboo.” Click here to read the Wired article in its entirety. 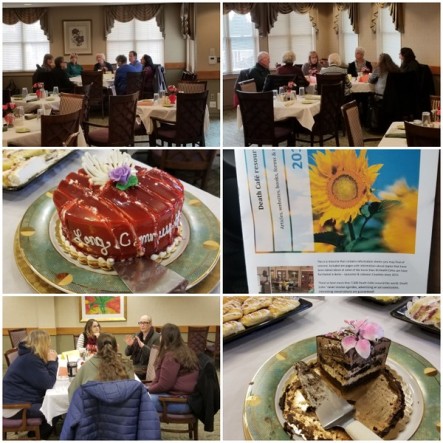 Cake — accompanied with coffee, tea and conversation — is a integral part of the more than 7,600 Death Cafes around the world. The above photo collage is from a January Death Cafe at the Long Community at Highland in Lancaster.

The Pennsylvania Link to Aging and Disability Resources | Berks-Lancaster-Lebanon Service Area has collaborated with facilities — libraries, churches, retirement communities, funeral homes and other sites — in the three county area to facilitate more than 32 Death Cafes since the first in 2015.

We’ve had two Death Cafes at an Irish pub, Tellus360: an exciting concept located in the heart of downtown Lancaster, PA where live music, farm-fresh food, and heaps of fun all come together; have a beer and catch up with each other – all under one green roof. We are productive, storytelling, life-living, loving, creative, and happy people who believe in a simple, community-driven life where everyone is equal, where anything is possible, and where life is good for all at the expense of none. We are learning constantly, questioning always, and are actively pursuing better ways of doing things in a continuous quest to find the simplest way of doing everything we do.”

And there’s a Death Cafe facebook group that was suggested by people who’ve attended some of these previous Death Cafes; click here to go to that page.