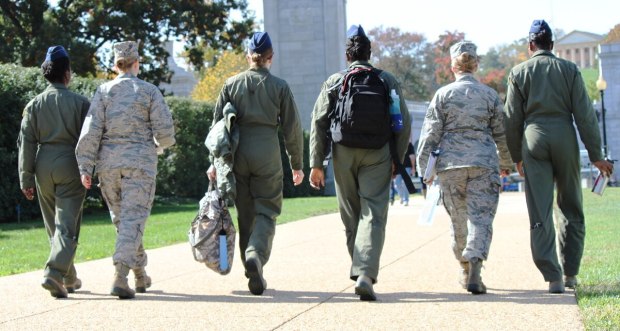 “The Women in Military Service to America Memorial, the only national museum honoring military women, celebrated its 15th anniversary on Oct. 20, 2012. (Veterans Affairs)”

“After four years on active duty, Amy left the Army and moved back to her hometown.

“However, she struggled to find her tribe. At work, she was told her handshake was a bit too firm and lectured about how her direct communication style made her coworkers uncomfortable. At her local VFW bar, the men stopped talking to stare at her, and her attempts to connect were met with awkward silences. A few other attempts to connect with the veteran communities she saw advertised at the VA and Facebook left her feeling similarly displaced.

“‘In both civilian settings and veteran settings, I was “weird,”’ she recalls.

She explored some of the newer veteran service organizations (VSOs), but most failed to include child care or weren’t kid-friendly. Amy was a single parent, so she mentally crossed those options off her list too. She stayed lonely, and slowly sank into a deep depression.

“The very word ‘veteran’ calls to mind the image of a man — particularly a male combat veteran.”