“Virginia Burton spent most of her life in and out of jail. In May, she graduated from the University of Washington after receiving a scholarship in 2020.” 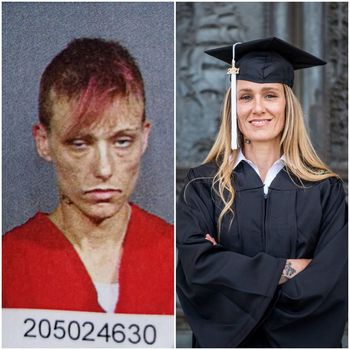 “How about that for motivation? I honestly thought I’d die on a park bench with a needle in my arm or by gunshot to the head. I would’ve never in a million years thought my life would look the way it does today.

“Stop selling yourself short. You don’t know what tomorrow might bring so you might consider starting today.” #wedorecover #dudeicantevenbelieveit

“Virginia “Ginny” Burton was 6 years old when she was introduced to marijuana by her drug-addicted mother. At the age of 12, she was using crystal meth. By 14, Burton, a student in an accelerated learning program, had dropped out of school and was smoking crack.

“’I went from being a really sweet kid to an angry and aggressive one,’ Burton, 48, told TODAY Health. ‘I didn’t want to be in a classroom. I just wanted to get high.’

“Burton found herself bouncing from one juvenile detention facility to the next. By 2012, Burton, a mom of three, was homeless, addicted to heroin and had served multiple prison sentences. Her children were taken away.

“’My kids would grab my ankles when I went into the kitchen because that’s where I smoked crack,’ Burton revealed. ‘My life was a nightmare.’

Click here to read this absolutely fascinating and riveting article in its entirety at today.com.